In 1873, Watson Allen built the first sawmill in this area, at the mouth of Tokul Creek, which is shown on the 1877 map of the Washington Territory. The mill used water from the creek to power the saw with an overshoot water wheel. The first lumber cut at the mill was used to build the fiirst school at The Landing (early name for Fall City). Watson Allen's property and sawmill were later deeded to Jeremiah Borst, in repayment for monies owed by Allen. 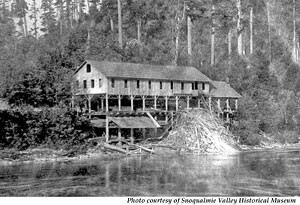 The following is an excerpt from an interview with Nancy Moore, about 15 years old, as quoted in the Valley Record, June 25, 1953:

The Mill was interesting, as it was the first lumber mill anywhere near Fall City. It was run by water power. Mr Allen had constructed a dam as the power source, a flume and millrace. There was no floor in the mill. There was a tramway on which the logs were sawed. The sawing was done by the Indians. Slabs were cut from four sides of the logs, which were then run up to the Indians, who kept turning the logs up to the saw.