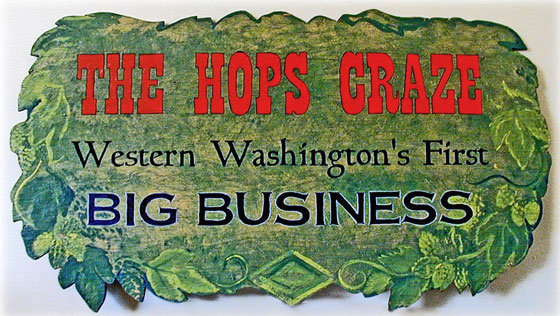 The unusual wooden building across the river in Fall City Community Park is the only structure remaining in King County from the "Hops Craze" - an agricultural boom in the late 1880s through early 1900s. It was built in 1888 by George Davis Rutherford, near a landing on the Snoqualmie River a short distance upstream from Fall City. (Early hop harvests were shipped by steamboat.) When the hops-growing boom collapsed, a shortened portion of the building was sold to Jack Bush and moved to its current location in 1904. Before King County later purchased the land for a park, the building was assessed by King County Preservation and declared an Historic Site, not to be torn down. In 1982, it received Landmark status.

In 1991, the Fall City Hop Shed Foundation was formed to see if it could be restored and preserved. The Foundation commissioned a study by Greg Watson, to provide detailed history and recommendations for restoration. The study was completed in 1995. Based on this document, a grant was received from King County Preservation to cover the cost of two years extensive restoration work…and an incredible project began! (We'll have links to more details later for those interested.) In 1997, an Open House was held at the restored Hop Shed to celebrate a successful restoration to a structure closer to its original design.

Read the full chronology of the Hop Shed here.

After almost 20 years, signs of serious deterioration again were evident. Fall City Historical received a grant to fund a detailed assessment of the building, completed in 2016. In 2017, a grant request was submitted to carry out some of the stabilization and preservation recommendations in the Assessment, but only funds for preservation and waterproofing treatment were received. In 2019 a grant request was again made to fund stabilization measures, but it was not funded. Part of the problem is, understandably, that King County Preservation does not want to bear all the cost for this needed maintenance. We are in the process of talking more with them, exploring other options, and trying to gather some funding locally. Stay tuned!