Allen Miller, speaker for our 2015 Community Meeting, brought along a mystery item...the train order hoop. Allen is shown with the hoop, with a "message" clipped to it. 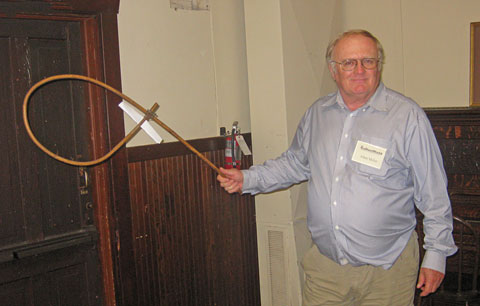 Following a disastrous collision in 2008, Congress decreed that US railroads must have a system of Positive Train Control, with the goal of insuring that no two trains attempt to occupy the same spot on planet earth at the same time! For many years, trains ran under the iron-fisted direction of the Train Dispatcher, the regulated clock, pocket watch, employee timetable and the flimsy train order. Any and all information that would impact the scheduled travel of trains was reported as promptly as possible to the Dispatcher, who then telegraphed it to the relevant train station personnel, who recorded it on "flimsies" (thin sheets used with carbon paper to make several copies) and then were tasked with handing off a copy to a passing train… preferably without requiring the train to come to a full stop, which was very costly in time and fuel. A copy needed to go to the engineer at the front of the train, and another copy to the conductor in the final car.