Featured from our Collections

This early program was donated in 2007 by Emma Jean McCurry, whose mother Gertrude Harshman is one of the "school girls" in the second part of the evening's entertainment. The program was performed by pupils of Edna Fowler Partch, who came to Fall City in 1906 to teach drama and elocution at Fall City High School, housed at that time in the Brown School. Her husband, Fayette Partch, died in 1911. In 1922, she married Doctor Walter Cheney, whose first wife had died after a long illness. As Edna Cheney, she continued to teach and present programs of her students' performances until the late 1940s. She died of a heart attack in 1953 at age 75. (click on photo for larger image) 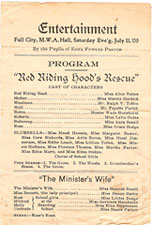 The program is also of interest because of the setting… the Modern Woodmen of America Hall. This group was organized in 1882, primarily for insurance purposes, with ritual and social aspects. They built the MWA Hall in 1908, on Orchard Street (338th PL SE), just south of Third Street (SE 43rd PL). The only photo of it was donated by Irene Parmelee Pike, who grew up in the historic Moore Parmelee home across the street. The MWA organization dwindled and about 1915 the Hall was converted to the Fall City Opera House. It had a stage and served as venue for many community activities, including dances and performances. It was torn down in about 1935. 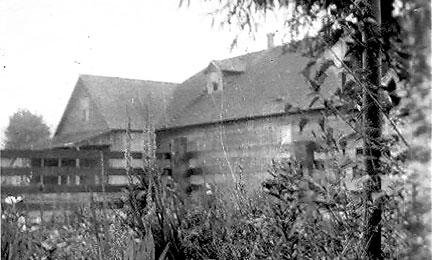