This yearly observance reminds us how little we know about Black community members in our areas! Recently we had the opportunity to learn about George Bush, one of the first settlers in the Puget Sound region.

A little known pioneer...George Bush   Our first awareness came from a Nov. 25, 2021 article in the Seattle TIMES, about a monument in his honor being unveiled at the state Capitol in Olympia. More detail was found in the Winter 1954-55 issue of Columbia Magazine, published by the Washington State Historical Society. Both of these present an amazing story of energy, courage, accomplishment and generosity. Bush and his family arrived in Thurston County in 1845, and helped found the town of Tumwater. In1850, Congress passed a law giving land in the Oregon and Washington Territories to any settler who claimed it. Bush was excluded, but the Washington Territorial Legislature lobbied Congress to carve out an exception for him. "He has contributed much towards the settlement of this territory, the suffering and needy never having applied to him in vain for succor and assistance," they wrote to congress in 1854. Bush was granted the full 640 acres that white couples received. The painting below shows the Bush house before it was torn down in 2011. 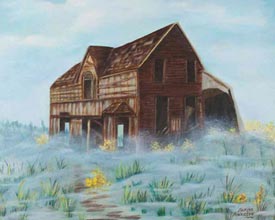 Keep an eye on this "Work in Progress" at WSHS!
Many thanks to WSHS for help with research on George Bush
and for the use of the painting shown above.