When the Seattle, Lake Shore and Eastern Railway arrived close to Fall City in 1889, our isolated community became connected with Seattle by rail and by telegraph. When the U.W. Postal service contracted with the railroad in 1891, mail came every day… a great improvement! In 1901, the Northern Pacific Railroad acquired the route.

We have been gathering information about the Northern Pacific Fall City Depot, located where the current Preston-Snoqualmie Trail crosses Lake Alice Road. The only photo of the depot, dated 1909, is from the collection of the Snoqualmie Valley Historical Museum. Thanks to the Northern Pacific Railway Historical Association, and especially Dave Sprau, we recently received the Station Map drawing shown below from WA State Department of Natural Resources. (No date is given on the drawing, but DNR contact said a very similar one of Snoqualmie Falls was dated 1914.) Much about railway operation can be learned from the drawing; see numbers and notes below.

[3] Falls City Depot with long raised wooden platform by the track. Note also the Agent's House behind the depot, with WC (outhouse). In the photo of the depot taken in 1909, the water tank is also shown in the background.

[4] Powder House used to store black powder for clearing debris along the tracks.

[5] Mile marker indicating 30 miles from the "zero" point near Woodinville.

[6] Bunk House for Japanese railroad workers, with WC. A second Bunk House was located just to the west of the end of this drawing.

[7] Dump Cinders Sign It was important for the steam locomotives to dump the ashes from their coal fires only at safe spots - either where the wooden ties were covered with tin or where the track was raised so the cinders would fall below the ties. Track crews kept the dump areas cleaned out.

[8] Water Tank, Diam. 22' The tank is shown in the photo at the bottom. It continued to be used until the end of railroad service in about 1975.

[9] The line running to the left from this number on the map, showing several "posts," is the telegraph line. The arrival of railway service at Fall City not only meant daily mail delivery, but easy access to telegraph service as well. In the depot photo above left, the sign at the near corner says TELEGRAPH.

[10] King County Bunkers To the east of the Fall City Depot, a spur off to the northwest was built around 1908 for the offloading of rock for road building. The lower of the two photos at right shows a view of the end of the spur from the west end. The upper photo shows a horse and wagon downloading gravel. The bunkers were torn down in the early 1920s.

You will notice that the Station Map is shows two names: Falls City written in hand, and Fall City in the official label at lower right. And the depot photo shows it labelled Falls City. And the Northern Pacific Memo dates the changing of the official name to Fall City in August 1915. 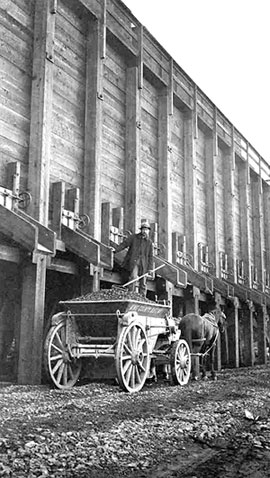 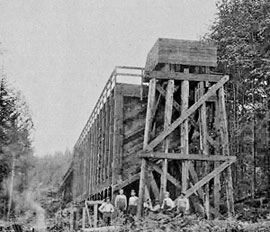 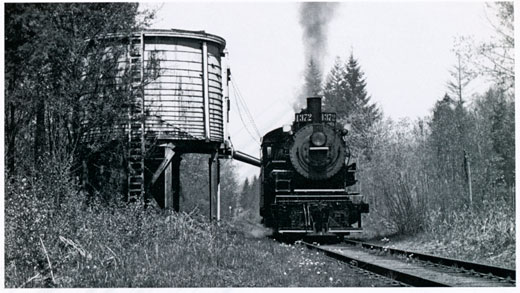 A special Casey Jones excursion in 1957 brought this steam locomotive into service. It is shown here at the Fall City Water Tank. The depot building had been torn down by this time. Harold Hill photo, from the NPRHA Mainstreeter magazine.

Naming of Fall City? The caption for the 1957 photo above included the following: The "Fall" in Fall City…was a one-time Wadley and Phelps Co. foreman on cattle drives over Snoqualmie Pass. He established a ferry and roadhouse at this point, formerly known as The Landing and Mountain View. We are trying to find the documentation for this theory.